Whither the Impartial Arbiters?

Impeachment may be imprudent. But this lamentable fact does not acquit Republicans who, in l’affaire Ukraine, have made it so.

The proximate cause of the U.S. House of Representatives’ decision to invoke articles of impeachment is the president’s scheme to link congressionally-authorized military aid for Ukraine to a commitment by Kyiv to pursue investigations into his chief rival. Trump, in short, has sought (unsuccessfully, thanks to the much-derided whistleblower) to grossly abuse his office for personal political gain.

Nothing that has yet come to light contradicts this pregnant allegation. On the available evidence, there is no reasonable doubt that Trump was engaged in anything short of the extortion of a foreign head of state—and the betrayal of the national-security interests of the United States—to smear a political opponent. Trump’s defenders contend that presidents often use various levers of power to induce foreign leaders to act in ways they might prefer not to, but these inducements are legitimate only in service of the national interest, which Trump’s patently were not.

As the impeachment process unfolds, it is becoming apparent that few American politicians seem to understand that democratic republics need to be bastions of moral order if they are to survive. Enlightened observers of the country’s public square beginning with the peerless Alexis de Tocqueville have nursed a great fear of “majority tyranny” on the grounds that the unfettered freedom of the mob would overrule, and thus undermine, constitutional government. Despite being a friend and admirer of “democracy in America,” or rather because he was those things, Tocqueville did not ignore the latent danger of “democratic despotism” involved in America’s revolution against monarchic and aristocratic institutions and suppositions.

Since America lacked an established hierarchy—the crown and classes of the mother country—it was liable to court the vices endemic in democracy’s full expression of the popular will: a lack of respect for ambition, achievement, and character. The failure to recognize, let alone cultivate, enterprise and excellence in individuals and in citizens would tend to diminish the basis of self-government and ultimately beget the greatest political evil: tyranny—and, with democratic pretenses, it would likely be a tyranny of the majority.

Since its founding, America’s most insightful and penetrating political minds worried about what the absence of a privileged but civic-minded elite would mean for the stability and coherence of the republic. Without the restraining influence of an elite committed to public service not as a profession but as a way of life, democratic politicians, wary of straying too far from the sentiments of the people, might overlook or even condone corrupt or nefarious political activity. It was a cause of further anxiety that the eventual emergence of a public-spirited elite would more likely elicit disdain than veneration from a people steeped in democracy’s egalitarian, leveling ethos.

Alexander Hamilton was fixated on this problem more than most. He foresaw the need for such a national elite—what might today be called, with appropriate irony, a deep state. In Federalist No. 35, he explained that public ministers as well as “men of the learned professions” would be the neutral and thus “impartial arbiters” between the diverse and potentially hostile factions that comprise society and government. 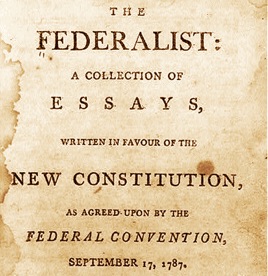 Within the government, this duty would fall most directly to senators, whom we know (from Federalist No. 64, penned by Jay) “have become the most distinguished by their abilities and virtue, and in whom the people perceive just grounds for confidence.”

Madison shared the view of his Federalist co-authors. Describing the Senate’s role in Congress’s legislative process, Madison wrote in Federalist No. 63 that legislation needed to be directed by “the cool and deliberate sense of the community,” not by florid, angry people moved by “some irregular passion” or by some demagogue’s “illicit advantage.” This is what would elevate the Senate above the House of Representatives: When the House was caught in a political maelstrom, the Senate would remain the “temperate and respectable body of citizens,” intervening “to suspend the blow mediated by the people against themselves, until reason, justice, and truth, can regain their authority over the public mind.”

This conception of the republican citizen and statesman used to garner more veneration than it does in our populist epoch. Since this “natural aristocracy” (to borrow Jefferson’s phrase) would be composed of men of means beholden to no one, it alone could be trusted to look after and jealously defend the general interests of society. Without such a class motivated by noblesse oblige, the Founders feared the country might fall prey to all manner of demagogues and populists and saboteurs who would rend the social fabric and put the national project at risk.

These points have a particular contemporary resonance as the House conducts its public impeachment hearings into the behavior of a corrupt, and corrupting, president. It has been dismal to behold the eagerness with which most congressional Republicans have committed themselves to the squalid task of excusing that corruption. This applies double in the Senate, where Republicans might have been expected to bear the responsibility of “refining and enlarging the public view,” as James Madison recommended in Federalist No. 10. Even if the House of Representatives (the more democratic body of the legislature, elected by a proportional system every two years) might succumb to hasty and ill-advised public opinion, the Senate (the more republican body) should be expected to hold the line in favor of the national interest.

Instead, with apparent disregard for their own congressional authority and constitutional duty, Republicans have treated this controversy as a false alarm confected by the opposition party. One is left to wonder what manner of venality and lawlessness on the part of this president would be required to incur their objection, let alone their outrage. They are now bound to a terrible fate: that of breaking with Trump (this much, considering the incumbent’s unscrupulousness and volatility, is all but inevitable), but too late.

It has oft been said that impeachment is a political decision rather than a matter of law. Just so. This does not mean, as some confused Trump apologists have suggested, that it is a nakedly partisan gambit to undo the results of democracy. Rather, it is a device to protect the public from presidential “perfidy”—the discerning of which is a political art, not a strictly legal judgment. It is precisely this fact that reveals the president’s apologists to be derelict in their duty. For the dispersement of congressionally-authorized military aid based on the president’s illicit whim is irrefutable evidence (to minds unclouded by low partisanship) that Trump is unfit to hold the levers of power. It strains credulity to imagine that it does not meet the standard of “treachery” posited by Gouverneur Morris at the constitutional convention when he advocated the recourse of impeachment to be placed in the nation’s charter.

There is, however, an important caveat to this analysis and argument, given the Republicans’ obstruction. Greg Weiner, who preaches “the politics of prudence,” has enunciated an economical truth that should be heeded by those advocating futile measures to eject the president from office: “That an offense is impeachable does not mean it warrants impeachment.” One reason to flinch from doing justice in a case that warrants impeachment is if a rigorous calculation of the political situation indicates that doing so will cause the heavens to fall, i.e., that an impeachment process would likely result in solidifying the political position of the official whose conduct merits impeachment.

Even if President Trump’s rapacious and reckless behavior has been impeachable, then, there is scant honor to be found in a foredoomed impeachment effort. An impeachment process in this feeble and decayed Republican zeitgeist looks like an ill-conceived design that holds little hope of achieving its stated objective. The prospect of a sizable Republican mutiny in the Senate against their standard-bearer is, to put it mildly, vanishingly small.

What’s more, following this course may well injure the prospects of the Democratic presidential candidate come next November. The electoral consequences of impeachment are unpredictable, but the simultaneous presentation of the case for impeaching the president over his foul misdeeds and the quotidian case for depriving him a second term based on his feeble execution of government will not be a pretty spectacle. The quality of such a promiscuous campaign would almost certainly be poor. The better wisdom suggests that the case can be made for impeachment or for Medicare-for-all, but not both. Democrats should choose lest they be lured into chasing two rabbits, both of which—following the Chinese adage—will likely escape.

But there can be no doubt that this president, who has betrayed his trust and subverted the national interest, is himself responsible for bringing on this impeachment challenge. As Alexander Hamilton wrote in Federalist No. 65, impeachable offenses should “relate chiefly to injuries done immediately to the society itself.” James Madison echoed this view during the Constitutional Convention, where he argued that impeachment should be the recourse “for defending the community against the incapacity, negligence or perfidy of the Chief Magistrate.” By this standard, running a parallel foreign policy for the main purpose of investigating and polluting his chief rival is an injury for which the president’s swift removal is abundantly justified.

That the Republican Party has proved itself, almost to a man, unable to “defend the community” by even censuring, let alone punishing, this grave violation only serves to demonstrate that it is bereft of the “impartial arbiters” once deemed so vital to a healthy republic. This wanton evasion of responsibility means that the task of removing an unfit president will have to be done the old-fashioned way: by the very people who put him in office to begin with—or not at all.

A version of this article was published in Quillette.